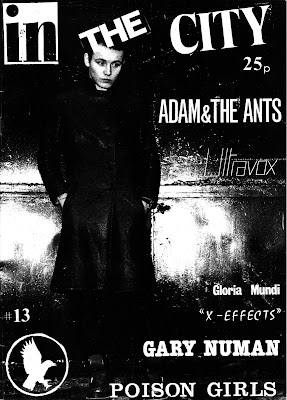 ITC: Is it still such a crime to "ask a lady her age"?
Vi: "Well, I think it's great that you've asked me and if I tell you - well I mean, I can say right now that I'm 43...." Vi stops and thinks: "....Is it 43 or 44?"
Vi Subversa, 1980
'
It's high time we had an In The City. I've got a fair few of these to post and I'll do them occasionally. Definitely one of the more attractive fanzines was ITC - the Poison Girls' pages in here are superb looking - some nice use of colour. But it's the written content that really made it - loads of credit to Peter Gilbert and Francis Drake. Given his ubiquity at the time this surprisingly is the first fanzine posted on EE to feature Adam Ant on the cover. Issue #13 also has: LPs - Crass (full page), Augustus Pablo, Creation Rockers Vols. 1-6 (VA), Rebel Music (VA), Punishment of Luxury, Talking Heads, Earcom 2 Comp', Cabaret Voltaire, The Carpettes, Poison Girls, Avon Calling (Bristol Comp), This Heat, The Slits, The Damned; Poetry - review of Annie Anxiety's, Eyes Of The Blind; Letters (incl 1 from Steve Ignorant in response to a query about Crass' advocacy of anarchy); Live - The Adverts/Cowboys International/Cuddly Toys, The Ruts/The Pack; ITC charts + 1 page The Ramones competition results article.

It's a pleasure Chris - you too are appreciated.

Thanks for this one Si. I've mailed you as well mate. Cheers :)

All the best to you.

Cheers Longy mate and thnks for the details.