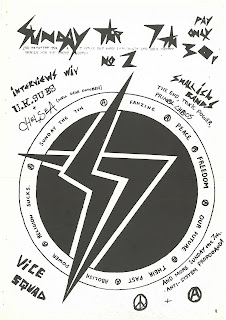 Following Bubs' departure Sunday The 7th became largely a sole effort by Martin "Cobby" Cobb, though Bubs does contribute...and Paul does too, er, so that’s clear enough then. Anyroad, there’s no doubting the quality of this 32 page bristling blighter! Featuring: profiles and interviews with Vice Squad, Toxic Power, The End (Matt McLeod, Trev A. Beckett, Ann Dee Martian, Zoff and Gary) + a plug for Sunday The 7th house band, Primal Chaos. Other interviews with: Chelsea’s, Gene October (an interesting comment from Gene on being asked about the frequent line-up changes could have come straight from M.E. Smith’s mouth, uncannily so really); and a decent 2 part interview with UK Subs’, Steve Roberts and Nicky Garratt, the latter proving particularly illuminating. Elsewhere there’s a delve into the Tribal Warfare issue; a rather astute look at TV, the press and advertising in Don't Believe the Media Lies; 6 Minute War warns about cruise missiles, and a review of The War Game in Banned by the BBC. Opinions has contributions from Bubs, Richard and Michelle with poetry and points of view about war and work + Ann Dee Fucking Martian holds fourth on The Anarchist Dilemma (and just in case a shitstorm kicks up about certain elements therein, just remember, I DIDN'T WRITE IT, OK?!). There are no record or tape reviews but Cobby does offer a snappy little rationale for eschewing such fripperies – though there are a couple of live reviews of UK Subs/Chelsea/Stiffs/Anti Pasti, and Vice Squad/Anti-Establishment + a neb at a few fanzines, some collage and Discharge lyrics. Good stuff! 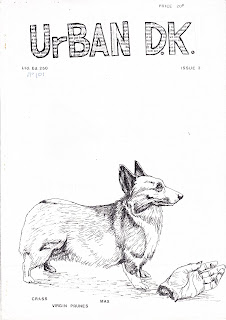 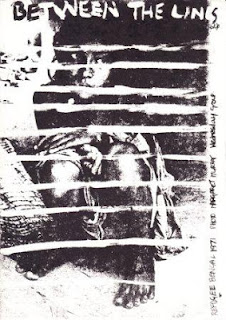 Not a straight-forward fanzine at all really – more a thoughtzine in which Anna, with recourse to writings from elsewhere, shares with us her inner machinations. Sure, there are interviews with Gloria Mundi and Poison Girls but those are resolutely of the searching variety –there’s barely a whiff of the, “what’s your favourite colour” school of interrogation. As was standard with Poison Girls, Anna’s encounter with Richard and Vi is particularly illuminating – more discussion than interview as we witness the subject and host on an equal footing. Anna’s ruminations on Thinking and Thoughts are ably bolstered by contributions from Di and Abe, along with: poetry from D. H. Lawrence, Jackie, John Betjeman and Wilfred Owen; a short extract on Swearing from George Orwell’s, Down and Out in Paris and London; and a reproduction of the widely distributed CND Leaflet, No More Hiroshimas. I've noted this as issue 1 though I understand it is in fact a one-off. All told, Between the Lines is a real gem.

To compliment this post I’m uploading a recording of Poison Girls live in Leeds. The recording was made by Troy Bunn. Troy happened to be an inveterate bootlegger and was often to be found rooted to a spot throughout the proceedings of many a gig frantically hushing any approaching souls with a finger to lips gesture lest any intrusive natterings spoil his recordings. Sadly, most of Troy’s live tapes were lost to a rash bout of recycling during the nineties but those that survived - including 2 more PG’ sets - will appear here eventually. This is a reasonable bootleg though those aurally delicate types may need to allow their lugs to adjust to the slight coarseness of the recording quality - the songs however remain as beautiful as ever.

Where’s The Pleasure?
Are You Happy Now?
Underbitch
Too Close For Comfort
Old Tart’s Song
Rio Disco Stink
Cry No More
Too Proud
Tension
Total Exposure
One Good Reason
Cream Dream
Persons Unknown
State Control
I’ve Done It All Before
Posted by Si at 04:15 No comments: 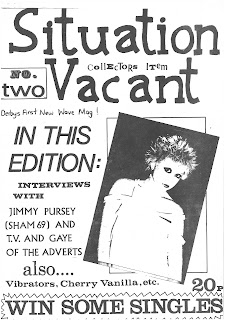 Here we go, the first for 2013 and it’s “Derby’s first new wave mag”! Worth noting that the Situation Vacant editorial team, Martin Roper, Russell Maw, Dugi Bell et al would go on to form Anti Pasti. In this issue of SV we have: interviews with Sham 69 and The Adverts; Seven Inchers – TRB, The Only Ones, Ian Dury & The Blockheads, The Radiators From Space, Magazine, XTC, Buzzcocks, Penetration; Larger Vinyl – The Only Ones, Buzzcocks; live – The Vibrators, Cherry Vanilla, Anti Nazi Carnival (X Ray Spex, Patrik Fitzgerald, The Clash, Steel Pulse, TRB, 90° Inclusive; Charts + a 1 page ad for The Skids.
A4 scanned at 600 dpi
Situation Vacant #2
Posted by Si at 15:47 3 comments: