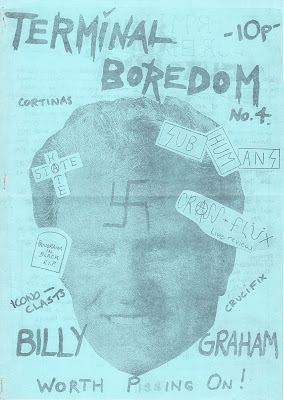 COAL NOT DOLE
It's more than a fight for jobs and cash now. It's a fight for freedom and basic human rights-we must support them + smash Thatcher.
FIGHT BACK-NEVER GIVE IN!
Stringy, 1984
Ok, so I'm gonna relent - sneakily though - this will be a triple posting - but since Terminal Boredom issues 6/7 were published in 1985 they'll be tacked on at the end with no banner. I'm making this (first) exception because the 2 issues describe/review events from 1984 and contain an exceptional 2 part Crass interview. Issue #4 includes a KUKL review. Live reviews: Nostell Priory Festival featuring The Damned/Chelsea/Dr. & The Medics; Conflict of Nations/Freestate; Disrupters; the Aderdare Colliseum Miners Benefit featuring Crass [last gig]/Flux of Pink Indians/Annie Anxiety. Lots of 'News' [Antisect, Hagar the Womb, The Sears, No Defences, Decadent Few] + an epitaph for Panorama in Black. The original quirky sequencing of the interviews with Subhumans and Iconoclasts are retained in the pdf. 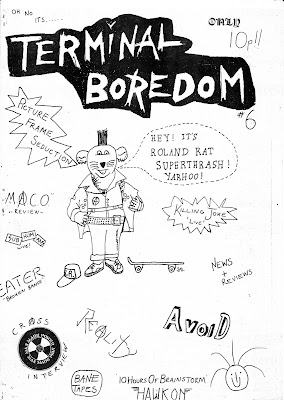 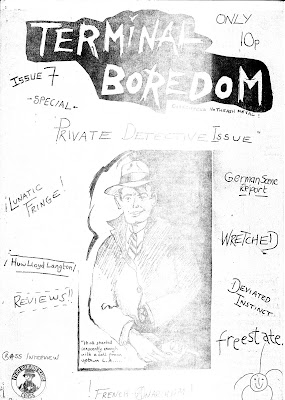 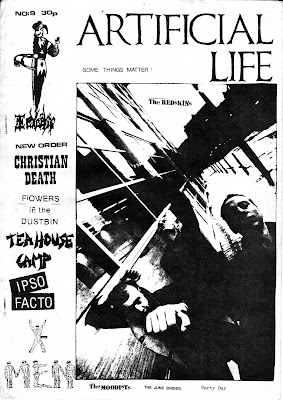 There seems to be a smell of boredom in the air as 1984 is 2/3s over...so let's do something about it and fight this apathy...fight back and reject what you don't want...moaning and groaning about everything isn't going to bring about change - only you can by having a positive outlook on everything.


Ah, the 'Positive Punk' credo as voiced by Richard North:
'
'It's a huge collective force that we can call the new positive punk - a re-evaluation and rejuvenation of the ideals that made the original outburst so great, an intensification of and expansion of that ethos of individuality, creativity and rebellion. The same buzz that burned our streets in '76/'77 is happening again'.
'
So, 'Positive Punk' was sold largely as an antidote to the doom and gloomongery of the Anarcho scene. I always thought it a bit odd myself - I mean, whilst it's true that there was a fair degree of 'moaning and groaning', the Anarchos were by and large a galvanising force. After all, Ian Astbury, of 'Positive Punk' vanguard The Southern Death Cult, drew huge inspiration from his days following Crass/roadying for Poison Girls. Nah, too much of a whiff of the marketing man about the whole notion. Anyway, this issue of Artificial Life also features The Pastels, a decent piece on Criminal Damage Records and a cracking little interview with The Redskins. Record/tape reviews: Some Things Matter Vol. 1, Passion Play Compilation, Xmal Deutschland, The Industrial Records Story 1976-1981, The Bohdi-Beats Poets, The Mighty Wah, Eternal Triangle, Genesis Gospel Singers, Sex Gang Children, 23 Skidoo, Portion Control, 400 Blows, Car Crash International, Biff Bang Pow, X Men, The Jasmine Minks, The Room, The Fall, In Excelsis, Artery, Ausgang, Ghost Riders, Anorexic Dead, Indians in Moscow, The Hollywood Brats, The Actives, Vicious Circle, Colour Box, Ipso Facto, The Tempest, and State of Affairs Compilation.
'
The remainder of Artificial Life were produced after 1984 so I'll not be posting them here, but if anybody wants copies of issues 10 and 11 I'm sure something can be arranged.
'
A4 scanned at 400 dpi.
Artificial Life #9
Posted by Si at 13:31 No comments: Hopefully this issue provides a variety of bands so that people who like one type of music will become aware of other types of music. Just because it's not 'hip' doesn't mean to say you can't like it!
Thanks to the bands that offer hope.
Jake Jacob, 1982
Well there's sure as hell no mistaking the variety - Amazulu & Mark Stewart! Crass & ABC!! All of them evenly handled in Artificial Life. Undoubtedly, the Gothic constituency was well served with this fanzine - so it's fair play to Jake. Issue 2 includes a 1 page review of Futurama 2 + plugs for The Southern Death Cult, Carmel, Tony Fletcher's Apocalypse, and a comical chat with Andy Partridge.
'
Interesting articles at the ever excellent Cactus Mouth Informer.
'
Artificial Life #2
Posted by Si at 13:01 2 comments: 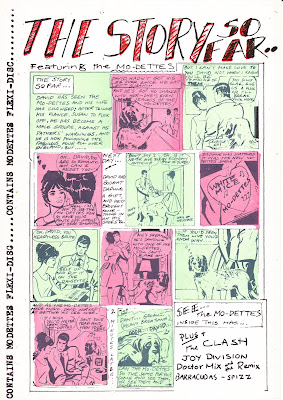 J: 'No, not really, but we've had to compromise, just like all idealists have to compromise. You win battles, you lose battles to win more. Like when they brought out Remote Control, we were pissed off, we just said, well we've lost a battle, but maybe We'll win the war'.
Joe Strummer to TSSF, 1980
'
Always having to explain themselves were The Clash - the sniping against them was constant - much of it from souls who'd 'ave probably been prog rocked to death were it not for the supremely inspirational Strummer and Co.. Anyway, there's a great encounter with the band in here - Kosmo and all. Fair pieces on Joy Division, Barracudas, The Surfaris, Daniel Miller. Live reviews: The Cramps, Athletico Spizz 80. Record reviews: Annette, Toyah, The Delvetts, The Original Smokehouse Band, The Balloon Farm and the Rockin' Ramrods. Stuffed with smashing pics. Flexi long lost.
'
A4 scanned at 400 dpi
'
The Story So Far #3
Posted by Si at 11:50 4 comments: 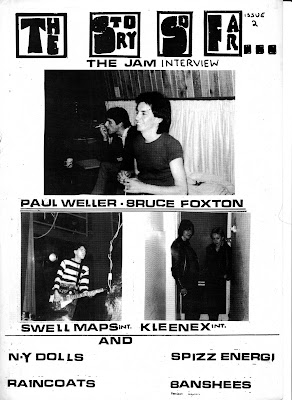 'Do you enjoy interviews?'

N: 'No I think all journalists and especially fanzine writers are prats, especially you two'.
Nikki Sudden to TSSF, 1979
'
Neat one here from Tim and Marts - lots of well reproduced photos; a boon no doubt of going the Better Badges* route. Checkout the tantalising picture of Kleenex in the Rough Trade shop... Great collection of bands covered in TSSF + live reviews: Dr. Mix/Scritti Politti/Swell Maps, The Passions.
'
*Better Badges article The Face, 1980.
'
A4 scanned at 400 dpi
The Story So Far #2
Posted by Si at 11:01 No comments: 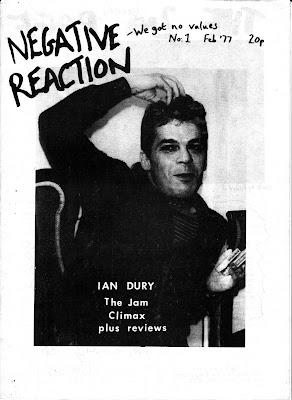 'We'd also like to gob on those who didn't do nothung to help us, or who just sneered. We hope your lobes drop off...'

ENTROPY IN A BABYLON '77
'
Negative Reaction, 1977
'
Negative Reaction was a great fanzine - a team effort headed up by Jon Romney, Charlie Jewel, and N. P. Parker. Unfortunately my collection is depleted to a sole #1 . Worth the price of entry for the cracking Ian Dury interview alone. Live reviews: The Derelicts/The Jam, and Climax Blues Band. Record reviews; Plummet Airlines, The Stranglers, Joan Armatrading, Racing Cars, and David Bowie. Charts etc.
'
Some bits and bobs from NR.
'
A3 folded to A4 scanned at 400 dpi
Negative Reaction #1
Posted by Si at 09:49 3 comments: 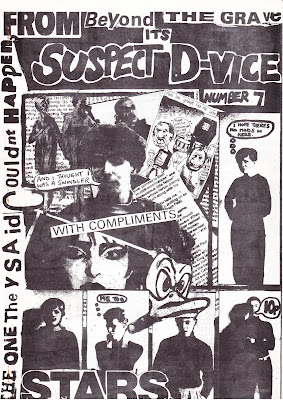 'So what do you reckon to the Buddy Holly Story then? Bland they reckon, fuck them, if this is bland then I'm happy to be boring.'
Paul O'Reilly, 1979
Good solo effort here from Mr. O'Reilly. Some sensible commentary on Mod revival/Tribalism + John Lydon on Juke Box Jury. Live reviews: Eddie Stanton/UK Decay/PneuMania/The No, Sore Willies/Eddie Stanton/The Transistors/Spizz Energi/UK Decay, The Human League, and The Psychedelic Furs/Spizz Energi. Record/Tape reviews: Siouxsie & The Banshees, The Cure, The Ramones, and The Terminal Cardigan. Malcolm's fizzog on the cover + letters etc.
'
A4 scanned at 400 dpi
Suspect Device #7
Posted by Si at 08:03 3 comments: 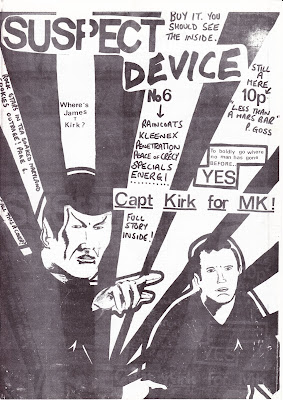 'Just to prove that we are human after all we here at SD have combined this month to produce our worst issue to date. Its really abysmal, boring, lacking in content and full of spacefilling crap.'
Paul O'Reilly, 1979
Tensions abound in Suspect Device#6, the last issue to feature contributions from Alison Glanville, The Mysterious 'PP', Linda Goss, and Pete Goss [all went on to produce The Buddy Holly Story]. True, content is a bit lacking - just 10 pages - but a decent enough fanzine anyway. Live reviews: Special AKA/Mekons/Gang of Four, the Rough Trade Tour (Kleenex/The Raincoats/Spizz Energi) in Lincoln, Wolverhampton, Nottingham, and London; record reviews, letters etc.
A4 scanned at 400 dpi
Suspect Device #6
Posted by Si at 06:58 No comments: 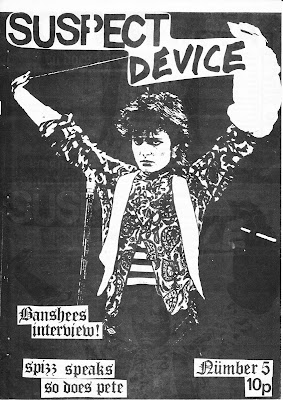 'Welcome to the greatest issue of any fanzine ever in the history of this or any other world, there is no way of escaping it, this issue Number 5 is just brilliant.'
John O'Reilly, 1979
Well it's cheers to Malcolm for all this stuff - I heard Jon Savage on the Radio this morning saying it's not possible to overstate the man's influence on popular culture - who could argue with that? Suspect Device#5 is just 1 testament among millions to Malcolm's greatness.
Happily, Spizzophiles were on board at Suspect Device so Spizz and Pete Petrol each have their tuppence on the Spizz Oil split - SCOOP! + an 'Exclusive' Spizz Energi poster. Disclaimer about its originating in SuperPop aside, the Banshees' interview is well worth a read. Live reviews of Doll by Doll/Scars, Psychedelic Furs, calamitous Rock Against Racism gig featuring The Quiffs/Pressure Shocks, Fischer Z, The Members, Wayne County/UK Subs/Spizz Energi, and The Specials; record reviews, letters etc. 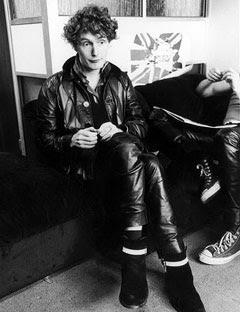 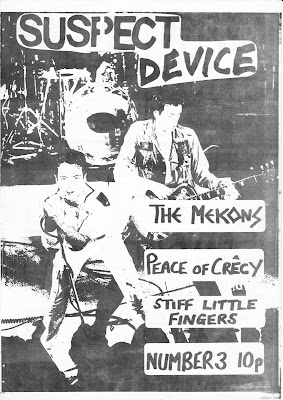 ...Well its not my fault if youre a moron and I wont care anyway cos well have 10p of yours to print the next issue with and we might just find someone who knows what were on about. You wont but youll buy the next one anyway cos youre frightened of missing something, see ya then suckers.'
Paul O'Reilly, 1979
It's gotten a bit heavy around here so I'm gonna try lightening-up for a while with some straightforward fanzines - starting with a bunch of Suspect Device. Bit of a collective effort this one, though Paul O'Reilly appears to have led the pack. Produced in Newport Pagnell. Live reviews of The Fall, 999/The Piranhas, Gang of Four, Fizcher Z, The Normal + a nice bit on Spizz Oil. Given the Clash bashing within, the cover's gotta be ironic.
A4 scanned at 400 dpi 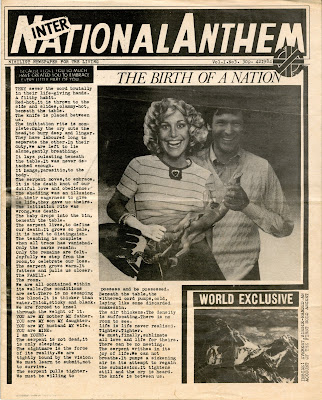 Out from your palaces, princes and queens,
out from your churches you clergy you christs,
I'll neither live nor die for your dreams,
I'll make no subscription to your paradise.
Penny Rimbaud, Demoncrats
Gee's artwork and Penny's writing brilliantly complimented one & other in these publications - image and word coalescing to frightening effect. Demoncrats (p. 5 in this issue) is a fine example of the coupling. True, they're citing themselves. Nevertheless, Demoncrats is one of Penny's finer poems and stands up no problem in this context; the chilling Reality Asylum painting/news-clipping crucifix juxtaposition an integral hub around which the dreadful text is wrapped. IA#3 is excellent throughout. The last issue to see the light - though many of the images for issues 4 & 5 can be seen in Gee's, Crass Art and Other Pre-Postmodernist Monsters [sorely in need of a reprint].
'
37cm x 30cm gloss paper - scanned at 300 dpi
'
International Anthem #3
Posted by Si at 12:01 No comments: