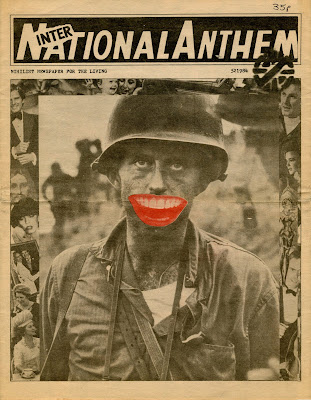 'I have publicly shouted out my distaste, a bitter BABEL that puckers THE MOUTH A SPIT. Now perhaps I stride out again into that snow covered field to stand halfway between resting posts.
'
TO STAND BEWILDERED AGAIN AND AGAIN AND AGAIN.

I feel the ice about my boots.

I WEAR BLACK, THE COLOUR OF DEATH. FLEETING IN MY ARROGANCE,
I turn to you.'
Penny Rimbaud, 1978
+
International Anthem #2 was the Domestic Violence edition. Penny's essay, Fray Bentos & Other Personnel, constitutes the bulk of the writing - its mix of visceral hyperreality and absurdist drama making for fascinating, though somewhat disconcerting reading. The voices of Eve Libertine and Joy De Vivre can be discerned clearly. Naturally, Gee's collage and gouache creations are fabulous throughout - though telling which is which is no mean feat. One thing that has long perplexed is the lack of recognition Gee enjoys. It is doubtful that the artist craves attention - after all, no degree of acclaim improves art. But it is irksome when good art is overlooked. To moan further, Black Dog publishers issued in 2008 a lavish book titled, Collage. There's not a single mention of Gee in that book - a shocking neglect of an artist whom sits comfortably alongside Hoch, Rauschenburg, Hamilton, Stezaker, Rosler and Linder. Whinge over.
34cm x 27cm newsprint - scanned at 300 dpi

International Anthem #2
Posted by Si at 13:59 No comments: 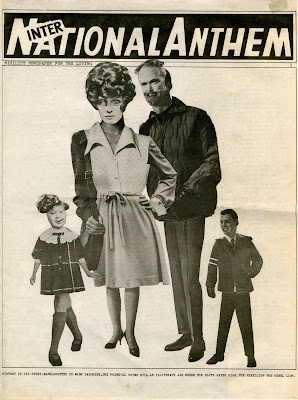 Who ate whose dinner?
Well the serpent just bit its own tail and
I'm hovering right up here ready to swoop,
this time the phoenixing bird is coming down, fast.
Punk is a voice of revolt, the music is incidental to the message, the message is
DO IT!
+
This is the business - International Anthem #1, the Education edition is a phenomenal production. The brainchild of Gee Vaucher, it offers a wealth of the artist's work. The skill of the hand at play is staggering. 5 editions were compiled - just 3 were published. Utilizing finances earned from illustrating in more corporate publications, Gee, based in New York at the time, initiated the 'nihilist newspaper for the living' as an 'alternative vehicle' for divergent thought and expression. Beneficent Crass would go on to shovel untold £thousands of wind fallen lucre into well worthy causes; encouraging and nurturing and giving succour up to and beyond their self assigned 1984 sell by date. Penny Rimbaud's searing essay, 'Crass at the Roxy, he falls articulating on the skinned dog', pretty much lays the foundation for the project. Great stuff.
+
35cm x 27cm newsprint - scanned at 360 dpi.
+
International Anthem #1
Posted by Si at 14:21 No comments: 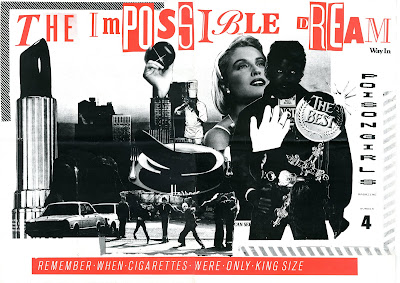 THE PRICE OF GRAIN
We all talk a lot about wanting to be free
Sitting in the last lap of luxury
While some are dying for a handful of rice
Who controls the market...who fixes the price
Boom and slump and waste and glut
The currency is human blood
THE PRICE OF BLOOD

The final edition of The Impossible Dream starkly delivers - apart from the splash of red on the cover it's black and white. In fact it couldn't be clearer. And a quarter century down the line nothing's really changed - the inhumans' needle keen cynicism permits them to extract still the price of grain and spend others' blood. Inspiring as they are, Vi's lovely 'words written in trust' are easily drowned-out by the well-drilled 'scintillilating stratagem' of which Pinter spoke.

Nevertheless, a great artifact: Vi as ever; Lance and Domino photomontage + contributions from Andrea Dworkin and William Burroughs. 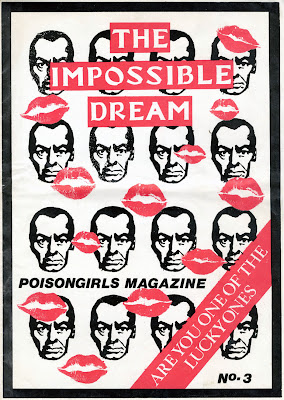 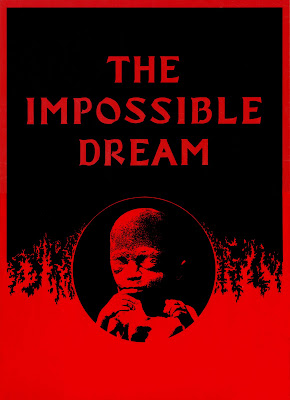 'In early 1981 I was purposely taken to see the Poison Girls, a mixed-gender anarcho-punk revivalist band. The lead singer, Vi Subversa, was a minor cult - a feisty, powerful middle-aged woman. Some of her songs were like raw Music Hall anthems with highly charged political lyrics and she growled them out to barmy armies of gobbing kids, twenty-five years her junior.
I'm not your fucking mother
I'm not your fucking whore
I'm not your little sister
Or the girl next door
Poisons had just broken their long association supporting punk extremists Crass, were about to headline a nationwide anti-nukes tour, and were looking for an innovative support act - a difficult job in difficult circumstances - but also, as it turned out, in excellent company. But that's another story'.
Tony Allen, 2002

I got a copy of The Impossible Dream #2 in 1981 at the Bradford Queen's Hall leg of the 'anti nukes tour': Poison Girls, The Mob, and The Southern Death Cult played - the astounding comic Tony Allen was on the bill but didn't perform. These glossy A3 affairs certainly were luscious productions - buggers to get home from gigs in one neat piece though. Clearly, scale and sheen aren't the sole attributes of The Impossible Dream #2. The visual content throughout is striking and woozingly affective lyricism teems from the pages. For light relief Lance interviews Penny Rimbaud to tittersome effect. 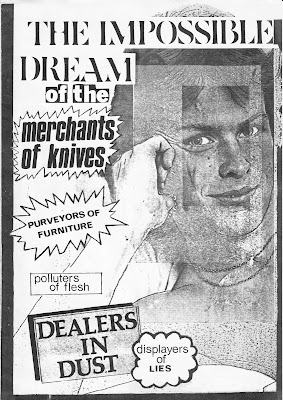 'PLEASE, WE SAY TO YOU NOW,

DO NOT ACCEPT THOSE THINGS
ESPECIALLY THOSE THINGS
THAT HAPPEN EVERY DAY
AND SEEM QUITE NATURAL.
FOR IN THESE TIMES
OF PLANNED CONFUSION
AND DELIBERATE VIOLENCE,
WHEN BLOOD RUNS
AND MEN ARE INHUMAN TO MEN.

And so it goes, 30 years on, the inhumans still hold sway. New confusions augment the old and violence is deliberate as ever. A question arises: might Poison Girls' and Pigs For Slaughter' ethics ever have been wed without their being the progenitors of newer confusions and yet more deliberate violence? A resolutely past tense poser there for you. Here, there's resignation: the inhuman grip is just too fast; prising free is an Impossible Dream.
'
At any rate, the Poison Girls were exceptional - their collaborative years with Crass and Annie Anxiety made for a compellingly inspirational package that steadfastly refused to be branded. The live manifestation of this triumvirate was utterly awesome to behold - leaving in its a wake a wealth of gorgeous publications and printed matter. Gonna get as much of it as possible up here starting with the run of The Impossible Dream. Credited to Poison Girls, Pete Wright, and Bert Brecht; the hands of Lance d' Boyle and Vi Subversa are up front.
Great stuff on Poison Girls at Kill Your Pet Puppy. 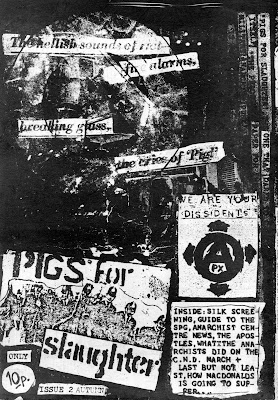 '...CHRIST THIS SOUNDS LIKE A TESCOES ADVERT'
'The perils which afflict a revolutionary communist surrounded by punks can be most eloquently expressed when a cold night in 1982 is summoned from memory: six bands were to play that night and Conflict were top of the bill. Myself and a colleague from the Wapping Autonomy Centre, Ian Slaughter, were irritated to the point of petrol bombs. These punks shouted about revolution as they punched the air with their fists, but frankly, the temporary displacement of a few nitrogen molecules isn't going to drastically hasten the demise of Western capitalism. Ian and I decided to give the revoltion a little assistance since in England it is a truism that in order to effect political change you have to blow it up, burn it down and kick it until it breaks'.
Andy Martin
About sums it up really - Pigs For Slaughter raged against inertia, taking a direct challenge to the 'scene' that spawned it. Stuff on The Apostles, A.Y.F., disrupting Hyde Park CND Rally, the SPG, trashing Macdonalds, Autonomy Centre News, and Screen Printing made easy. 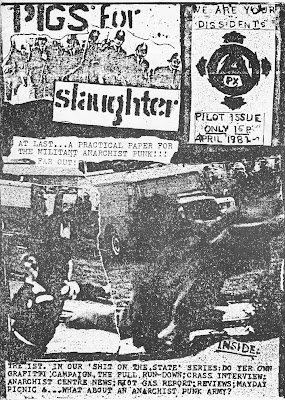 'AT LAST...A PRACTICAL PAPER FOR THE MILITANT ANARCHIST PUNK!!!
FAR OUT'
16 tightly packed angry pages from Ian Slaughter et al. Pigs For Slaughter was an in-house organ for the short lived [August 1981-March 1982] Wapping Autonomy Centre. Risque activism tips: good stuff on grafitti, May Day, The Anarchist Centre; reviews + a searching interview with Crass.
'PIGS FOR SLAUGHTER was a fanzine produced in 1981-1982 by Ian Slaughter, a staunch ally of The Apostles in their early days. It bacame infamous within the otherwise pacifist anarcho-punk scene for its support of revolutionary violence, guerilla tactics and direct action, coupled with an overt criticisn of Crass and their ilk. Many of the graphics from Pigs For Slaughter were later used as artwork on The Apostles' record sleeves. The Apostles song "Pigs For Slaughter" was written in tribute to the fanzine and was later covered by Oi Polloi. The Anarchist Youth Federation was organised by a number of those involved with Pigs For Slaughter, The Apostles and the Anarchy Centres before being absorbed into the embryonic CLASS WAR group. The A.Y.F. symbol was a recurring image on all Apostles releases.'
Lifted from Apostles Site.
As ever, for horse's mouth stuff about the London Autonomists and comments from Ian Slaughter, see Kill Your Pet Puppy here; and here for more info and an mp3 of The Apostles song, Pigs for Slaughter. Futher mentions here and here. 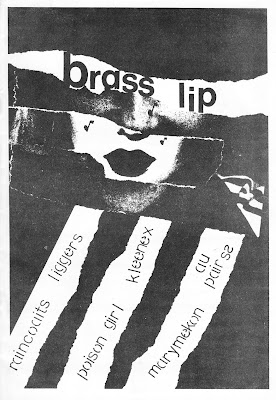 'A MESSAGE FROM THE QUEEN ON THE OPENING OF BRASS LIP...
...It seems ironic at a time when our nation has a female Monarch, a female Prime Minister and female members of the Stock Exchange that most women - despite their obvious superiority - see their role as housewives and mothers; but then, so often, this is thrust upon one. After all, I didn't ask to be Queen'.
Suzy Varty, 1979
Great visual appeal with this the sole issue of Brass Lip - all 32 pages of it look great. Design/layout - Susy Varty, interviews - Syd Freake & Connie Klassen, printed by Mosside Community Press. Fantastic content in this fanzine; the interview with Vi Subversa is a belter.
Brass Lip
Posted by Si at 10:33 2 comments: 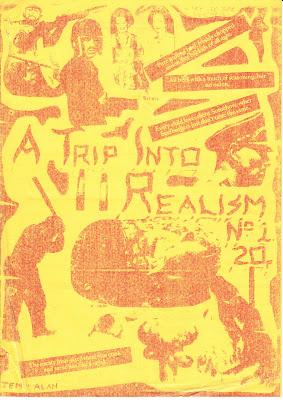 
Hello and welcome to 'A Trip Into Realism' No. 1. I have tried to cut down on the number of bands in this issue as I want this fanzine to be as informative as possible. The last fanzine I worked on 'Cardboard Theatre' (With Dave) as now completely sold out which is really great news. Not a lot has happened in Whitby since...'
Vince, 1984


Neatly delivers on the informative front with good pieces on bloodsports and squatting + a decent Coal-black comedy from Chumba's Boffo. Bits on Death Zone, Reality Control, Mass Black, and Famous Imposters; gig review of Poison Girls/Toxic Shock/Mark Miwurdz/Chumbawamba; Tape and Fanzine reviews.
.
A tad feint in parts - but bold throughout.
A Trip Into Realism #1
Posted by Si at 12:09 1 comment: 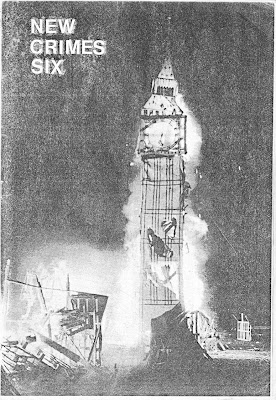 'ALL POWER TO THE IMAGINATION'

'To the joy of some, to the horror of others, New Crimes 6 has eventually come out, so sucks to those who said I'd given up!'

Another excellent issue of New Crimes - like #5, rammed with interesting articles - just look at the material Graham Burnett had to leave out: Genetic Mistakes, Psycho Faction, Napalm Death, Xpozez, and Native Propoganda. 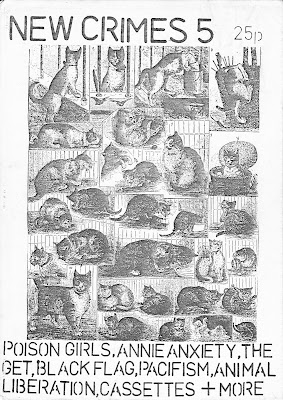 "Welcome to the 5th issue of New Crimes, very definitely the best one yet as I'm sure you'll agree. The response to issue 4 really amazed me, and its been selling all over the country, so I've decided to print 350-400 (Not sure yet at time of writing) instead of 200 as in the past."
Jah Ovjam, 1981
I only got 2 issues of New Crimes but saw others - all were excellent efforts. The fanzine was produced by Graham Burnett (Jah Ovjam) in Southend On Sea during 1980-1983. The '+ MORE' alone in here [pieces on Flack, The Instant Automatons, Primal Chaos, Cold War, AWOL, Part 1, The Apostles; gig reviews of Sinyx/Black Flag, Crass/Poison Girls/Flux/Annie Anxiety, U2/Altered Images, Flux, The Slits, The Revillos, Discharge/Exploited/Anti Pasti/Chron Gen/ The Wretched; record reviews, and 2 fanzine round ups], would be enough to fill your average fanzine of the time.


Also, check out Graham's ongoing positivity @ Spiralseed
Posted by Si at 10:31 No comments: 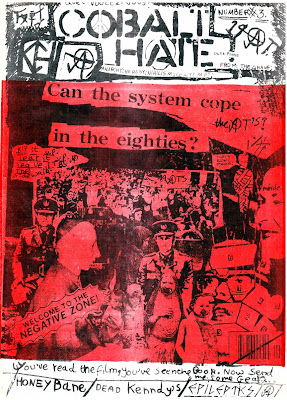 "FIRSTLY, I LIKE TO SAY...BLAR, BLAR BLAR...
...HELLO, THIS IS C. H. No. 3, IF YOU DON'T LIKE IT, BURN IT."
'
Here's a great issue of Cobalt Hate for you. Product of another benefit gig involving Crass and Poison Girls - these C.H. fellows sure had some generous support: and they repaid in spades with this fanzine. Imaginative and irreverent as ever with excellent use of colour. Lots on Dead Kennedys, Epileptics, Honey Bane (page inverted in original flipped in pdf); gig and record reviews + more Charlie's Angels piss-takery with Jowlie's Robots.
.
Can anybody out there fill the gap where C.H. #2 should be?
"You've read the film, you've seen the Book now..."