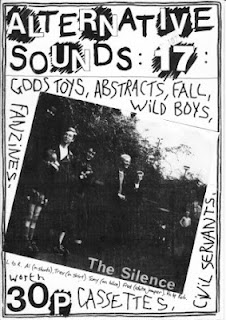 Here's the penultimate issue of Martin Bowes', Alternative Sounds. Martin (still active in the band Attrition) pulled-off a remarkable feat in producing all 18 copies of Alternative Sounds between February '79 - November '80. I say remarkable because as issue 17 attests, Alternative Sounds was a rather snazzy proposition, not at all a slap-dash affair. Check out the nifty variations in layout and presentation - all making for a dazzlingly dynamic fanzine experience. Apparently the name, Alternative Sounds, was something of a swipe at the decidedly more corporate, Sounds. At any rate, Martin was clearly a dab-hand at the fanzine lark and here in #17 he kindly offers notes from his mooted guide to fanzine creation. Elsewhere we see Martin championing Coventry fanzines (1 page), another page given over to fanzines in general + Do-it-Yourself; tips and pointers to creating a fanzine. Lastly, Martin offers a teaser for the then upcoming Something Else' visit to Coventry on which he was set to demonstrate the art of fanzine creation. A true ambassador for the D.I.Y. ethic, make no mistake. Elsewhere, Alternative Sounds is stuffed to the point of bursting with: profiles - Ambivalent Scale collective, Coventry record shops, The Civil Servants, The Silence, The Wild Boys; interviews - The Abstracts, God's Toys (featuring former AS contributor Dill); reviews - Boys & Girls Comp' (The Human Cabbages, The Clique Syndicate, L'Homme de Terre, The Famous 5, First Offence), Bouncing in the Red Comp' (Steel Pulse, Steve Gibbons, Ricky Cool, UB40, The Denizens, Dangerous Girls), T Rex, Cockney Rebel, The Dead Kennedys, The Louder Animal Group, The Observe, The Damned, Killing Joke, The Glaxo Babies; cassettes - Fantaccini Playground (The Muliple Jesu), The Stick Insects (Puritan Ethic), Cryptic Clues (Half Alive); live - The Fall, The Nightingales; letters and news on X-Certs, the Bush Telegraph, and the Squad's splitting-up. Brilliant stuff! 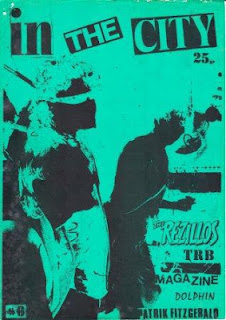 Still lot's of other titles to appear on ee but I thought I'd slap on another ITC - definitely one of my favourite fanzines, despite its knockers. As usual, Pete Gilbert and Frank Drake dish-up lashings of intelligent comment, interviews, news, reviews and original Gilbert photos. Quick note, I can't quite scan the cover correctly - it should be garish puke green but appears here a tame turquoise - ho hum! Anyway, bollocks aside, ITC#6 features: an extensive review of The Rezillos at the Marquee + in depth interview with Eugene, Faye and John; TRB in the USA reviewed by Cathy Nemeth and an ITC interview with Dolphin + bonus poem from the charming TRB drummer (he really is sound, I once interviewed him alongside Jake Burns during his stint with SLF - that interview appeared in the 3rd and last issue of my Fanzine, Creation, limited to a measly  20 copies - if I ever find a copy I'll whack it on ee and give y'all a laugh); onwards with an extended appraisal of Magazine's, Real Life; Patrik Fitzgerald live; Jawing offers an Ultravox Warning; reviews of 7"s by The Diodes, Johnny Thunders, Skooshny, Tonight, Steel Pulse, The Normal, Ian Gomm, The Lurkers, Rich Kids, Automatics, Patrik Fitzgerald, Jet Bronx, Fruit Eating Bears, Penetration, The Tights, Elton Mottelo, Essential Logic, Destroy All Monsters, Cane (3X3), Buzzcocks, and Martin & The Brownshirts. Its Killa dilla!
'
A4 single and double sided scanned at 600 dpi
In The City #6
Posted by Si at 12:03 2 comments: 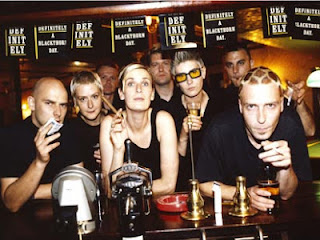 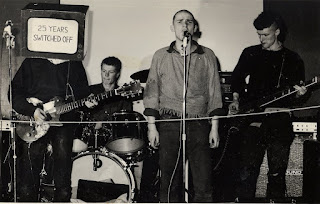 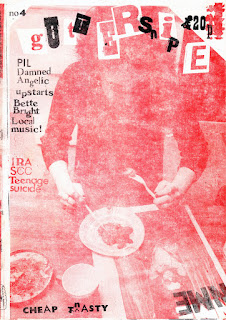 Guttersnipe was a collective effort produced at Telford Community Arts centre Printshop between 1978 - 1982. Largely the work of 'young punks', Guttersnipe was overseen by TCA staff, Graham Peet amongst them. Partly funded by Arts Council money, pressures saw a degree of bowdlerisation - evident in this issue - and the source of heated discussions in later issues. Lots of Guttersnipes to appear here on ee. This issue has Angelic Upstarts, including a brief interview with Mensi; the Seventh Anniversary of Bloody Sunday in Hyde Park; Guttersnipe talks to two 16 year olds Mickey + Jean about their attempts to commit suicide; Guttersnipe in London featuring The Angelic Upstarts at the Marquee and a review of the Small Wonder Records showcase (Patrik Fitzgerald/The Molesters/Crass); live - Public Image Limited/John Cooper Clarke/Linton Kwesi Johnson/The Pop Group, Bette Bright & The Illuminations/Spizz Energi, The Damned/The Radio Stars/Capital Letters, The ID/Strange Pleasure, Scherzo, 90 Degrees Inclusive; 7"s - Eddie & The Hot Rods, The Ruts, The Fall, Blondie, The Mekons, Throbbing Gristle, The Cure, The Weirdos, The Members, T.V. Personalities, Neon Hearts; Virgin and Reggae charts and letters.