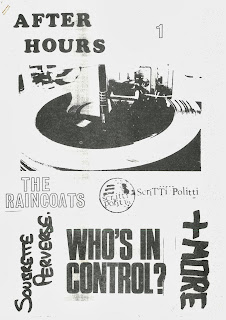 From the pressing plants to the concert halls we want some control!
Jon and Charles did a sterling job with this fanzine - the Scritti Politti and The Raincoats interviews are excellent and I advise downloading the pdf for those alone. Apart from the eds., After Hours had  input from John Lipnicki, James Fox, Jo, Neil Andersen, Shirley O'Loughlin and Neil Clifford. Sniffin' Glue, Dirt and Black Dwarf cited as inspiration. Interviews with The Raincoats (7 pages given over), The Prefects, and Scritti Politti; articles featuring Soubrette Perverse, Who Really Runs Rock 'n' Roll? (the music industry scutinised), Prag VEC, Fireplace, Superman, and Wayne Kramer. Again, this scant write-up does no real justice to this fine zine. Issue 2 is equally superb and will appear on ee in the near future.
A4 scanned at 400 dpi
After Hours #1
Posted by Si at 06:22 No comments: 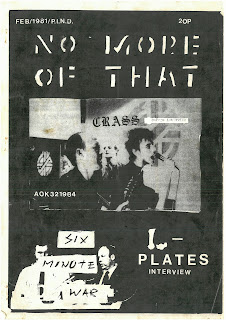 It's written in their rules
To put missiles before hospitals
A smashing little fanzine is this No More of That. Assembled by Bobby Gray in Airdrie, it's a somewhat slim affair - just the 12 pages but enough is packed in to be of interest. Interviews with Crass, Six Minute War (quite a lengthy effort by 6MW standards - it may be the longest interview I've seen with those DIY wunderkids) and The L Plates. There's a wee feature on the band End Result, Kelly Woz Nowhere focuses on a TV programme entitled, Kelly Woz Here, and Oi the Farce has a critical look at Garry Bushell's brainchild. Overall it's a very entertaining little number. I'm rather desperately trying to get me mitts on issue 2 of NMoT so if any soul out there can help me out that'd be ace…the desolate sound of tumbleweed…
A4 scanned at 400 dpi
No More of That #1
Posted by Si at 07:06 3 comments: 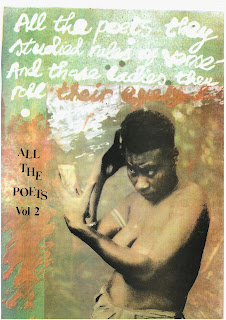 We talk from dark places
Words fall from our lips
Deaths on
Indifferent Tongues
As promised here's issue 2 of Mark Schlossberg's and John Tottenham's, All the Poets. Shouts go out to the Savage Prodigals: Billy Carless, Anna, Maureen, Lynn, Bernard. Annie Anxiety contributed also and there's a Syd Barrett effort resurrected too. Issue 1 can be seen here along with a rake of poetry tinged offerings. Work on this exceptional atrefact was overseen by Better Badges supremo, Joly McFie who commented recently: "looking at it, I remember the big development here was that I fugured out how to do cheapo colour seperation on our process camera using colour filters and angled screens, and making the plates myself. Like 5 quid versus 100 quid for the pro version". Isn't it heartening to know that behind the scenes there acted such a conscientious soul seeking to improve the quality of fanzine printing whilst striving to keep the printing costs at a minimum. Coming soon will be an ee megapost featuring input from Joly along with recollections about some notable BB produced fanzines - keep your eyes peeled for that. 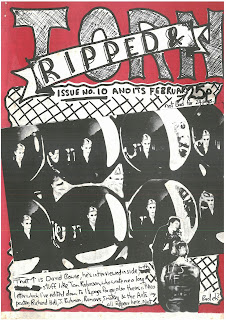 And now for something completely different…
I thought I'd bang on another of these big hitters. Here's issue 10 of Tony D's essential Ripped & Torn - it's a legend in itself. Tony was aided and abetted here by David Yuratich, Phil Smee, Jem Gibbs, Alex Fergusson and Caris. Issue 10 is absolutely rammed with charts, an interview with David Bowie, A Non Reply from His Highness being something of a swipe at Richard Hell), Today Your Love Tomorrow a Press Conference featuring  The Ramones, Rockabilly Uprising (has a gander at Whirlwind / Levi & the Rockats, A Pop Band Who Care features an extensive letter from Tom Robinson, an article about Smokey (not the Bradford band), LP reviews of Blondie, Wayne County & the Electric Chairs, Whirlwind, 7" reviews of 999, Kim Fowley, Raped, Buzzcocks, The Wasps, Penetration, The Rezillos, Metal Urbain, The Viletones, Harry Toledo, Human Switchboard EP. Elsewhere we have Antz images and Heroin Lyric. Again, this write up just about scratches the surface. Brill!
A4 scanned at 600 dpi
Ripped & Torn #10
Posted by Si at 06:59 No comments: 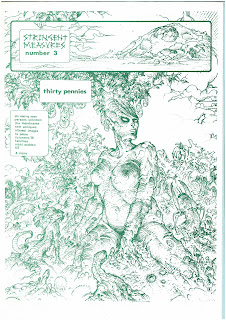 A Kind of Ferocious Holiness


Hailing from Leamington Spa, issue 3 of Chris Coleman's Stringent Measures was predicted and proved to be the final issue - which is a shame given the charming contents of this lovingly crafted fanzine. Following on from the extensive introduction we have an interview with The Sussed; articles about the Shrinking Men, New Antiques, Futurama 1981 Stafford (Blue Orchids, Theatre of Hate, Diagram Brothers, Eyeless in Gaza, UK Decay, Bow Wow Wow, The Passions, Ponderosa Glee Boys, 23 Skidoo, Revenna & the Magnetics, Cry, Bauhaus, Gang of Four, Virgin Prunes, Modern Eon, Doll By Doll…'anyway, the weekend was £10…well…er…well it was £10 spent'.), Altered Images (article and photos by Mark Webb), Persons Unknown, The Membranes, U2 (1 page gig and LP review), La Peine, and a 1 page essay on fanzines. Elsewhere there are reviews of Rudi, Bits, Joy Division, Alvin the Aardvark, The Human League, Sussed, ABC, The Membranes, Sonar + The Unofficial Nikki Sudden Fan Club.
A3 folded scanned at 400 dpi
Stringent Measures #3
Posted by Si at 05:26 No comments: 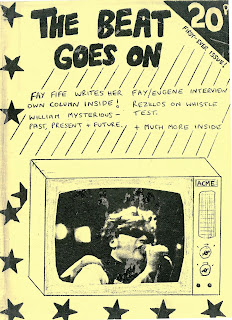 Do Not Adjust Your Set
I wanted to post this back in July following the sad news of Alastair Donaldson's passing but I couldn't locate the TBGOs in the archive - anyway, I found the blighters - 2 editions TBGO and the dinky Daily Raj - issue 2 and DR will follow in a wee while. TBGO hailed from Edinburgh and appears to be a sole effort by Bob Jefferson (of earlier Rezillozine, 2000AD fame) though shouts did go out to Mark Wollrich and Nick Kershaw. TBGO marked the period following the demise of The Rezillos and the emergence of The Revillos. Issue #1 of this neat little gem features Do Not Adjust Your Set (stills from the band's The Old Grey Whistle Test appearance), an interview with Faye and Eugene, a letter from Faye, The Life &Times of William Mysterious, Rezillos' Bits & Pieces, Shake Rattle and Roll being a squint at Jo Callis' 'new' project, TBGO's playlist in Our Fave Discs and a review of Mission Accomplished…..It Gets Me!
A4 folded scanned at 400 dpi
The Beat Goes On #1
Posted by Si at 06:52 No comments: 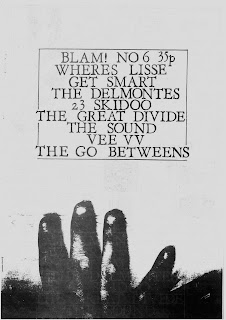 They Went Bravely Through All The Motions
Here ya go - this is issue 6 of Peter Hall's cool fanzine, Blam - I did say I will be posting lots of Blams and I hope to have the full run up here eventually since it's one that I particularly enjoy. This issue has interviews with The Insane Picnic, I'm Dead, The Delmontes, The Go-Betweens, and The Sounds; a 1 page reviews of Deutsch Amerikanische Freundschaft's 'Fur Immer' by Albert Hardwick + 2 pages of tapes; articles on/about Where's Lisse, The Great Divide, A Cheap Holiday in Other People's Misery (spotlight on festivals including Stonehenge, Glastonbury and Womad), Living on a Nerve End by Martin Newell, 'being an account of a D.I.Y. cassette maniac', Tinguely at the Tate Gallery, 23 Skidoo, Meat for Monsters (by Steve Lamacq), Stress, Get Smart, Joy Division (unofficial discography), and Metamorphosis. All of that + some odd bits & bobs and a rather decent fanzine round-up for good measure.