This poem is acting.....
It's pretending it's important.
It's all swagger and bluff.
This poem does not realise
appearances are not enough -
It's got to MEAN something
whether it's whispering or screaming!
This poem does not have a heart
just a minimal calculating brain
getting away with masquerading tricks
which it uses time and time again.
Too many poems are murdered by posing pens
which stab like knives - Penknives!
That's a clever literary joke
hiding the fact that this poem has no life!
This poem could be screaming blue murder
at all injustice and inequality
but it gives out not a murmur........
This poem is devious;
It's content to have no relevant content
It's just sitting on the fence
and if it did have a message
it wouldn't make any difference;
who listens to poetry anyway?
It's only preaching to the converted.
Poetry won't change anything -
those who do not choose
to hear the whispers and screams
can ignore the truth and rage
by not even opening the book
to see the seething page.
SO THIS POEM DOESN'T EVEN TRY -
and if this poem was torn up, burnt, destroyed!
It would be no real loss
because this poem has given up -
It just couldn't give a toss!
Peter Campbell

I reckon that sets the tone of this post nicely. Atilla The Stockbroker thought it a suitable salvo too - it being the opening poem in his ripping Tirane Thrash. You'll find issue 1 of that caustic zine below along with a teeming trove of rantabulous delights. I've tried to cover the broadest range of poets & ranters as possible and barring the inevitable slippages from my crowded-out memory I've accounted for all those I can remember. Mark Schlossberg's, All The Poets lends us our title and given the alphabetic listing kicks us off in considerable style. Obviously there had to be some John Cooper Clarke and it must be said, Barney Bubble's JCC Directory 1979 is a brilliant publication. Naturally, influential stuff from Andy T et al is well accounted for. At any rate the anarcho strain of poetry had a huge impact on yours truly. Mick Turpin's, Another Day Another Word partially covers the Skinhead poets - excellent examples of which can be heard on the early Oi LPs, with Garry Johnson perhaps being the exemplar in the field (imo). True, the bulk of material here is testament to the virulence of the ranting rash that spread throughout the UK between '81-'84. Additional to the charmingly threatening cast of well-known ranters there ought to be a passing nod to the innumerable individuals taking to the nation’s stages for impromptu performances - some nervously wielding hastily scrawled screeds and others with just a head full of anger and a tongue willing to tell it straight. It’s probable that most cities and towns had unrecorded outbreaks of the ranting bug. To illustrate, Bradford is well represented here, boasting as it does such luminaries as Seething Wells (RIP), Nick Toczek, Joolz, Little Brother, and Wild Willy Beckett (RIP). But off the top of my head I can also cite from that fair City Rudi the Poet, Tony Palmer, and Jacko as incessant ranters for whom little or no documentary material remains. So this is in no way an attempt to anthologise the whole of the ranting movement - that'd be as preposterous as trying to record the entirety of fanzine output. As ever, contributions most welcome. Thanks to Andy T. 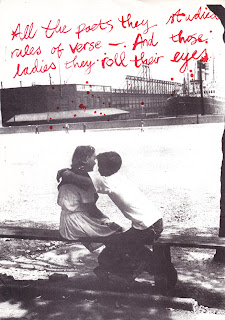 Great one here from Mark Schlossberg, Billy Carless and John Tottenham. Worth noting, Mark had an earlier hand in  Skum fanzine circa '77. Three issues of ATP saw the light between '79-'80. I also have issue 2 which will appear here eventually.
All The Poets #1 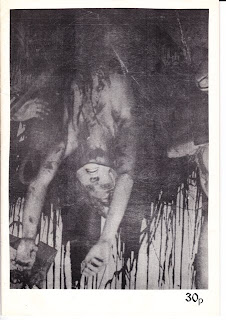 Andy T's contributions to the Bullshit Detector compilation hugely influenced me and the kids around my neck of the woods. The Weary of the Flesh 7" for Crass Records saw Andy hitting a striking stride with a simply startling collection of poetry. All of that and more is collected in the thrumming pamphlet, Andy T Poems. The second of these publications is a seriously classy affair and is something of a collective effort featuring great collage work alongside the poetic contributions from Andy, Claire, Pam Demonium, Sioux, and Lee (see Anathema #1, Anathema #2, and Spitting Pretty Pikktures for a fuller view of Lee's impressive output). A right belter I tell ya! Andy remains vitally active as ever - catch him if you can.
Andy T Poems
Andy T 30p

Another Day Another Word, 1982 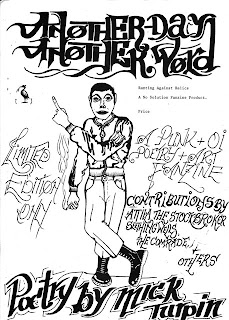 'Welcome to Another Day, Another Word. Hope you enjoy reading it because there's been a lot of hard work gone into it. Originally this fanzine was just meant to be a showcase of Mick Turpin's - Merseyside Poet - work (though at least half the poems in this fanzine are his). But, I decided to invite a few of the best up and coming poets in the country to contribute some of their work to this fanzine. I personally think that all the contributors here are shedding new light onto a scene that has been dominated by old sixties has beens and more recently John Cooper Clark and Linton Qwesi Johnson who have dominated poetry since the 76/77 Punk explosion. As Swells would say 'RANT AGAINST RELICS' and I hope this fanzine is a little help in giving Poetry/Rant a 76/77 style shake up'.
Mick Turpin 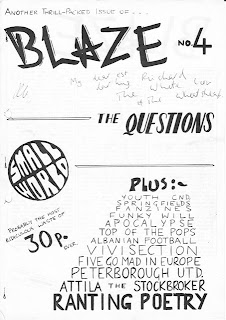 'Welcome to the ranting poetry section of Blaze 4, featuring classic works of English Literature from such hallowed and revered scribes as Kool Knotes, Attila The Stockbroker and Swift Nick. We start with a couple from Richard Kool Knotes Edwards, internationally renowned as the man behind the greatest fanzine in the history of the entire universe, Cool Notes - a man strangely obsessed with reggae buses and goats, who has only one major fault - he supports Colchester United!'
Janine Booth
Blaze #4 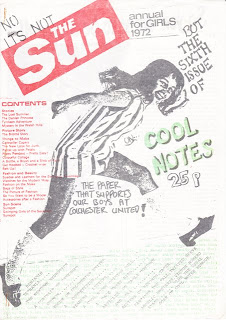 Cool Notes was Richard Edwards' fanzine and being something of a ranter himself he always a reserved a bit of space for the versifiers. Just a few pages of Benjamin Zephaniah lifted from this issue.
Cool Notes #6 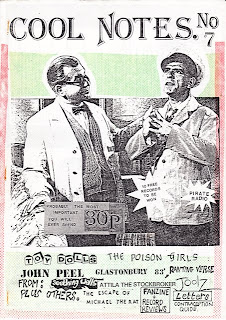 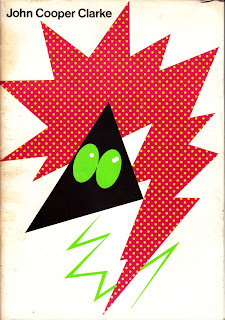 I'm fairly certain this is the first piece of Barney Bubbles to crop-up on EE - which is surprising really given the incredible amount of work BB churned out. Thing is, since BB pretty much never signed his creations it is possible that something has sneaked through uncredited. Anyway, The JCC Directory is a brilliant vehicle for the Salfordian bard's ace poetry and is neatly furnished throughout with Kevin Cummins, Tom Sheehan, and Paul Slattery photography. ﻿
JCC Directory 1979 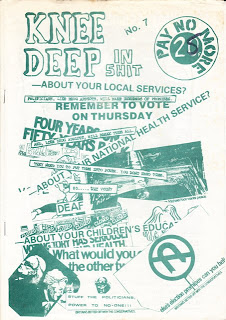 Just a couple a pages lifted from this issue of KDIS: Wild Willy Beckett's, Privilege finely illustrated by Joolz; and Joolz in her own write with Latest Craze.
Knee Deep in Shit #7 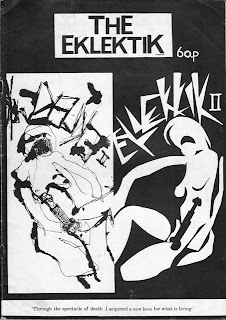 This dark beauty is credited to Sri Dred Nana and Notkotts which I think translates as Andy Palmer and T42 (Freddie 'Seaman' Stockton), both of whom to a greater or lesser degree formed part of Crass. In keeping with Exitstencil Press productions The Eklektik is an exquisite piece. Treat yourself and just luxuriate in its sumptuousness.
The Eklektik #2 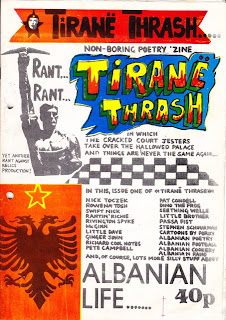 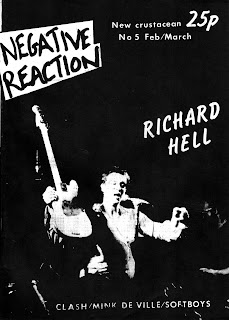 Paul Simonon draws a pistol, takes careful aim, and shoots Richard Hell’s guitarist in the head with a piece of spud – so this is what they mean when they say punk is violent?
I managed to get my mitts on another issue of Negative Reaction and a fine edition it is too. Jon Romney, Wendy Shock, Dave Burnett, Andrew Duncan, Chris Green and Jimmy Olsen offer up some decent interviews with The Clash, Richard Hell, Mink DeVille, and The Soft Boys - all accompanied with Chas Diamond, Ivor Fried, and Sheely Weels' snazzy photos. Elsewhere there are reviews of The Roogalator, Eno, Fast Breeder, Deke Leonard/Iceberg (live); articles on The Zip-Tones (featuring Charlie Chainsaw), Reggae, and Dada; cartoons from Ignatz Ersatz and Jon Romney; charts and a smashing advert for The Art Attacks, I am a Dalek/Neutron Bomb. Completely riveting reading.
A3 folded scanned at 600 dpi
Negative Reaction #5
More Negative Reaction courtesy of Nat Over at You're a Disease
Posted by Si at 06:00 5 comments: 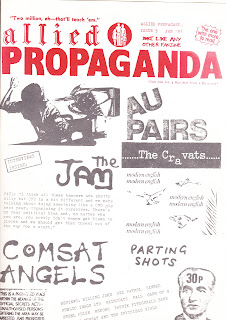 I think the world is totally fucked up at the moment because there's a distribution problem. There's too much wealth and too much power placed in one solitary area
Paul Weller

Well no change in that respect then, excepting that the divide between the haves and have nots has grown starker - I see no reason to anticipate any change in 2012 - cheery sod aren't I...Anyway, here's a prompt start to the new year with issue 5 of Mick and Ray's excellent Allied Propaganda. Great interviews with The Comsat Angels, The Jam (P. Weller), Modern English, The Cravats, Au Pairs, and Parting Shots; vinyl reviews of Killing Joke, Ski Patrol, The Damned, PIL, The Fall, The Clash, Orange Juice, Delta 5, Blue Orchids, They Must Be Russians, and Josef K; live reviews of The Comsat Angels, Pauline Murray & The Invisible Girls, and Patrik Fitzgerald; news on Killing Joke, The Cravats, Young Marble Giants, and The Raincoats; a decent fanzine round-up; letters; charts + Mick and Ray's playlists. Elsewhere we have Mick on crowd control / nerve gas - quite pertinent today really given the government's green light for the police to use tougher measures in the wake of the recent UK riots - yes, including live rounds - - a word or 2 on fanzine writers turning freelance for more faceless publications and Ray has a quick look at racism on the terraces + some helpful hints about getting gigs and finding booking agents. A right smasher of a fanzine.


Happy New Year
To all ee readers and followers. I'm looking to get a bit smarter in 2012 with more regular posting. Before this month is out I will deliver the poetry special I've had planned for yonks. There'll be a rake of fun competitions and some other nifty treats I have up me sleeve.
May the light of a thousand suns cobble your path through 2012
Allied Propaganda #5