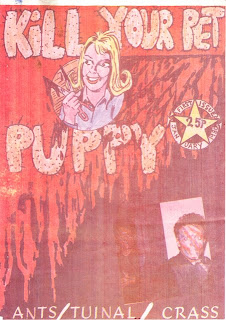 I’m so cute and loveable, little do you suspect I’m the first in a long list of instruments designed to teach you to be dependent on useless objects. Enslaving you for a lifetime of obedience to an outside agent that demands you sacrifice your independence to serve – in return I give you dubious security and peace of mind.
Tony D.

Frankly, a no show for Kill Your Pet Puppy would be recklessly remiss of ee. Like R.E.M., KYPP sits comfortably in the firmament of exceptional zines (imo). Aesthetically delightful; every issue of KYPP thrums with colourful appeal, an appellation editor Tony D. nailed thoroughly with his earlier bona fide classic, Ripped & Torn. Undoubtedly, an adept hand was at the tiller here, but as Tony noted, ‘there’s no technique that I used in printing this that you couldn’t do – it’s been put together on the floor with felt pens, glue & scissors’. Ahhh, that good old cut and paste of yore and honest to goodness encouragement to boot. Of course, visual attraction alone does not make for a quality zine and happily KYPP’s vivid palette is easily equalled by the verve and zing of its written content. Anyway, enough of my gobbets, for a far fuller appraisal see the KYPP site here. Also, you can have a look at the full run of KYPP here (there's also tons of fabulous ephemera there for you to feast upon). Excitingly, Tony D. has also made the full run of R&T available here. Topper stuff indeed! #1 of KYPP, compiled in collusion with the Puppy Collective (Val, Brett, Phillipe, and Jeremy) features: Adam & The Antz, Tuinal, Crass (a reproduction of the pamphlet Crass/Poison Girls’ issued after the disastrous Nov ’79 Conway Hall gig + KYPP’s critical take on that event); Jeremy Gluck’s, ‘Pop Fans of The World Unite; and cranking up the Crass quotient, a 1 page Stations of the Crass review. As Tony acknowledged, ‘it’s a bit skinny (18 pages) but at least it’s not padded out’ with crap. Right on!