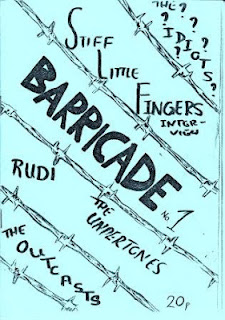 BARRICADE. Why did you leave Belfast?
HENRY. I didn't I still live there.

It's a buoyant one is Barricade - its unabashed enthusiasm for 'everything musical from Ulster' is to be applauded. Based in Saltash/Cornwall Dave, Mark and Sarah produced, I think 4 issues of Barricade between 1980-1982. Features, live reviews and interviews with SLF (Henry Cluney), Rudi, The Outcasts, The Undertones, and The Idiots. If you've not seen it yet, watch John T. Davis' excellent 1979 film Shell Shock Rock - this fantastic document of Northern Ireland's vibrant punk scene is a fair indicator of why Barricade came into being.
'
A4 Folded scanned at 600 dpi
Barricade #1
Posted by Si at 15:31 2 comments: 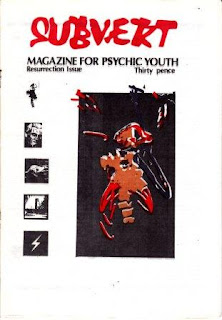 Here you go, an 'early 80's classic from Keighley' - so says Sned over at the UK Zine Library where the lad has uploaded issues 2, 3 and 5 - collected here at Punks is Hippies. I agree, it's a belter, especially appealing for those with an anarcho/industrial bent - - spot-on work by Richard Jevons. Ironically, the interview with John Peel sees our dearly departed DJ disapproving of most of the groups featured in Subvert #4; namely Throbbing Gristle, Poison Girls and Crass. There are brief pieces on ABC, and Guiseley's, Requiem* - whom it's worth noting had a fair fanzine creator in their midst in the form of guitarist Hitch whose Shiny Calipers will eventually feature here on ee. Requiem** bassist/vocalist Jont and I would go on to make rakes of noise, completing 3 tours of Europe  and recording a 12" with Zed*** between '89 - '91,  and later getting somewhat laid back with Mark 'Marky' Appleyard's Moota****. Elsewhere we have reviews of the Wargasm compilation, Zoundz, The Business, Conflict, Rudimentary Peni, Scritti Politti and Rubella Ballet. 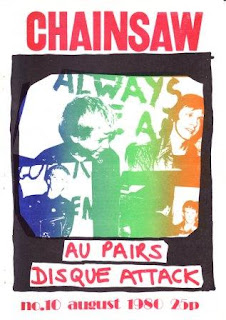 Issue 10 of Chainsaw is post missing 'n' type key - consequentially every 'n' was painstakingly inked-in by Charlie Chainsaw's fair hand. Reasonably in-depth interviews with Au Pairs and Disque Attack account for the bulk of the fanzine. Mike Weller provides the comic strip, Hate on the Dole and there are a couple of short pieces: Contaminational Power looks at defence spending and Anarchy and Freedom ponders political systems, drawing a rather surprisingly pro status quo conclusion. Review of Chaos, Six Minute War, Milkmen, and The Capitalists live at Polio Hall. Brief appraisals of a batch of 7"s: Girls At Our Best, Anorexia, Klinik, Six Minute War, and The Instant Automatons. 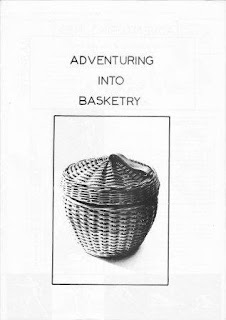 4 Issues of Adventuring Into Basketry were published during 1981/1982 - if it proves popular here I'll post the lot. AIB was a collective effort from Neil Burrows, Andrew Hulme, Ian Rockley and Jon Tait; the title inspired by a Swell Maps song. It's a rather stylish proposition with poetry from J. Tait; interviews with Echo & the Bunnymen, and 23 Jewels; a profile of Swell Maps' Golden Cockrill; LP reviews - Killing Joke, The Red Crayola, The Raincoats, Josef K, and The Flying Lizards; 7" reviews - The Associates, 23 Jewels, The Barry Gray Orchestra, The Monochrome Set, The Red Crayola, Blurt, The Durutti Column, Essential Logic, Virna Lindt, Mari Wilson, Shake Shake, Il Y A Volkswagens, and Visitors; live - Tuxedomoon, Bauhaus/Subway Sect/Birthday Party, The Cure, Iggy Pop. Regular features in the form of Baskets of the Month and Spitfire Parade + a liberal sprinkling of basketry related diagrams.

A3 folded scanned at 600 dpi
Adventuring Into Basketry #1 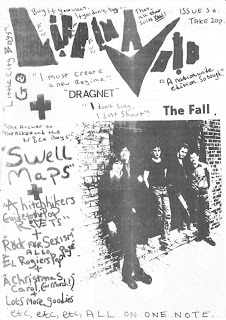 It's got a lot of attitude has this Life In A Void; quite snotty throughout - which is mostly to the good really. Though the iffy devilry evident in Rock For Sexism treads too readily into the realms of sordid misogyny for comfort...unless of course it truly was just a ploy to ensure a "full malebag". That aside LIAV#5b keenly advocates the post punk ethos; eschewing technical proficiency, overblown production, and the audience/performer divide in favour of the raw-energy-driven euphoric immediacy of the performance - ineptitude being a boon rather than barrier. Hence, the Pink Military/Swell Maps review sharply contrasts Jayne Casey's apparent bid for stardom with the "groaning squeking squelching guitar with thumping bass and thrashing rhythms..the beautiful chaotic structured noise" of the Maps. There's an appreciation of The Fall's Witch Trials and Dragnet. Typical Boys is a Medway scene report featuring Cenetrox, The Ripsnorters, Tam O'Shanter, Rivals, The Ignorants, Those Helicopters, and The Pop Rivets + Extra Notes reports, 'The Ripsnorters split up'! There's a selection of fanzine ads, studio recommendations, and independent record company addresses. The Hitch-hiker's Guide to The Pop Rivets takes the form of a rather snazzy cartoon and Rog's Pop Page has the last word.