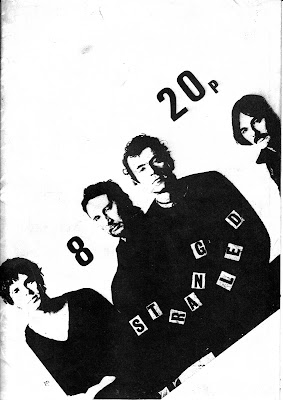 WHO PUT THE BENZYDRINE IN MRS. MELLYS OVALTINE?
I'm gonna slap on a Strangled. Partly for the pleasure of seeing it on the blog, but mainly as an excuse to point you here where pdfs of all 9 issues of Strangled volume 1 can be viewed.
'
Strangled was the work of Tony Moon and Alan Edwards. Moon is credited with production of Sideburns fanzine (4 issues) - notably, the December '76 issue featured the much copied Playing in the band diagram - can anybody pluck that one out of the ether? Wouldn't it be pleasing to see some online Sideburns......? Anyway, Issue 8 of Strangled has Kaine Kinetics; interviews with David Thomas (Pere Ubu), Hugh Cornwell, JJ Burnel, and George Melly + editorial, bits on cannabis legalisation, video revolution, news, and a HC cartoon.'
A3 folded scanned at 400dpi.
Strangled #8
Posted by Si at 11:27

Cheers for this one Si (and for the link to that nice site!) I'm uploading a nice Hugh Cornwell video for the weekend as it happens :)

Nice one Longy - I look forward to snaffling the HC vid - just been watching the Feelgood one - top stuff!

I'm gearing-up to do a mega-posting on the Bradford scene - but not just the fanzines,there'll be mp3s too of bands featured in them - some known - but mostly obscure outfits that never released their stuff - so loads of ropey old demos lol...

...you may have to bear with me through all that.

Thanks for this one Si....fantastic stuff,went watching them in Manchester a bit back,fantastic gig ! Thought the last studio LP (Suite XVI) was possibly their best since the raven.Thanks again !

Thanks Chris - the Strangled site is a beaut' - worth keeping an eye on that one for further volumes. It's pathetic I know, but I struggled with The Stranglers after Hugh left - though with all the positive things I've heard about Suite XVI I really should give it a fair listen.

As ever thanks for your support.

Great to see some old punk zines online. I'm in the process of setting up a blog.. mot specically for zines but i've got a load so will be glad to share them. (Have a couple of the old Sideburns..not sure if they have the 3 chords diagram. Think I have it in Skum #1 tho..) I'll let you know when I get it going.
Cheers,
DaveO

Hi DaveO, that's great - it all sounds so interesting - yes, please do keep me in the loop. It's marvelous that you have some Sideburns too. This fanzine blogging is really starting to gather a pace - good on you for joining in.

All the best with blog.

Hi Si,
I got the blog going.. put Skum 1 up for the first post.
http://daveo-musicandstuff.blogspot.com/

I'll dig out the Sideburns and try to post them later this week. I used DivShare for storage but may check out Mediafire.. downloading seem simpler with them.. Is the unlimited space /band width their site talks about for real?
Cheers,
Dave

DaveO, I've just had a quick peek at your blog - excellent stuff - I like the eclectic approach - there are a few items on there that I will be snaffling for sure - I'll have a word with you over at your place.

I'm really excited about the fanzines you will be posting - and again, it's great that you will be making the Sideburns available. I have just 1 issue of Skum - mine appears to be foolscap...

again, all the best with blog.

Apologies DaveO, about Mediafire - I couldn't say for certain if their patter is entirely straight-up. I upgraded to Mediafire Pro for peanuts really and it's way more than enough space etc for my needs - but it would appear from your maiden post that you will be needing far more space than that which I use. I'd have a bit more of delve if I were you - but MF is the easiest/most manageable host that I have come across.