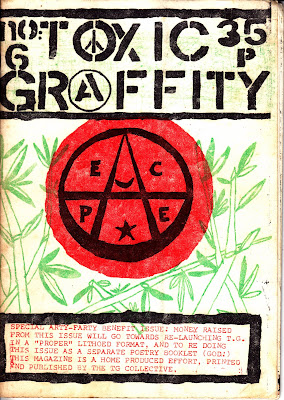 I OPPOSE
THEIR DREAD DREAM,
OF DEATH, DESTRUCTION,
THEIR FUNERAL PYRE,
THAT'D MAKE THE EARTH,
WRENT AN UNHEARD
DEATH-SCREAM,
I OPPOSE THIS,
LEST THE NEW WARM FLESH
OF NEW BORN AMBER
WOULD BURN, BLISTER,
BOIL
'
Toxic Graffity was definitely one of the more thought-provoking productions - I'll not say fanzine as that clearly misrepresents this publication - TG main man, Mike Diboll referred to an earlier issue as 'THE SHITZINE' - and latterly termed TG an 'anarcho-punk agit-art magazine'. Anyway, this 'special arty-farty benefit issue' is quite a radical departure from the earlier TG A4 format - the profits from it were to be channelled into production of lithoed TGs - sadly, those never materialised. Mike explains the rational and the tussle with Better Badges in the editorial of this issue - & for an extended lowdown see the fascinating TG post over on Kill Your Pet Puppy - be sure to check out the ensuing comments in which Mike and Joly (BB) go some way towards patching-up their rift.
'
I can't quite fathom the numbering sequence of TG - I have issues #3, #4, #5 (2 slightly different editions), & #6 - now, Mike says he produced 5 issues - do the variations on issue #5 count as 2 or were there issues preceding #3? There is mention in #3 of it being 'belated', so I'm guessing there were earlier issues. Any info gratefully received. At any rate, I'll be posting them all here - you lucky people.
'
Competition Time
As promised, since this is the first, albeit late, anniversary ee posting I'm giving away a copy of TG #6 - bear in mind that this was an entirely DIY edition and was limited to, I think, 200 copies - quite unlike the preceding issue which, in no small part due to the inclusion of a Crass flexi disc, sold something in the region of 10, 000 copies. To cop hold of it, check the ee collage masthead - I update it now and again - on this occasion I've added 5 artists/groups that clearly have no place on this blog - the first person to spot the greatest number of these erroneous acts gets the goods. Finding them all will be quite tricky and comments will be moderated until the winner is announced a week hence. Good luck.
A4 folded scanned at 400 dpi
Toxic Graffity #6
Posted by Si at 09:23

please donate to japan please go to www.paypal.com you may just save a life.

Thanks for posting this Si....must admit only ever seen the issue with crass in....still got it somewhere....and the flexi as well,got a vinyl copy of the single as well.Think i may have 4 of the groups on the masthead...Abba,Right Said Fred,Julio Iglesias & Bucks Fizz....then again...anyway,thanks for posting this !

Hi Si, I think I've got 4 of them Right Said Fred, Abba, Julio Ingleaias and The Who. I thought the other one might be Pink Floyd [in the top right hand corner behind the chumbas writing] that might just be my eyes though. It might be something to do with the PARIS logo on the top left, as i don't recognize that? On the other hand I probably shouldn't enter anyway? Cheers,Andy xx

So, only Andy and Chris fancied having a stab at the competition - surprised me that given the 62 unique downloaders to date. Anyway, well done Chris, the piece is yours - I'll get that off to you tomorrow. Big thanks to Andy for entering into the spirit as ever.

All the best chaps

Fiddlesticks! I missed this!

Thanks for sharing though Si: I had a copy of this at the time, but gave it to someone at the end of the 80's when I needed to 'streamline' all of the tat I was hoarding...

I never saw copies of 1 and 2 of TG back then...It's a little like SCUM (the fanzine made by - amongst others - Andy Martin of The Apostles): that seemed to appear at issue 4 - I'd never seen mention of any earlier issues...

Thanks for that Nic - yes, I've got a sneaking suspicion TG#3 was the earliest - though I think I might try to contact Mike just to get the last word. Given the overall quality and density of TG, if there are earlier issues I'd really like to see them.

Sorry you missed the comp - I think the next one will be the Nicky & the Dots 7".

Thanks for the scan of TG 3, Si: I couldn't see a 'Comment' link on the post so I thought I'd stick it here...

I've never seen this issue before: of particualr interest is the short article on the 'Birmingham Punk Scene' as I'm local. The Fighting Cocks pub mentioned is still going and I have popped in there many-a-time...It also mentions Antisocial who were the band of the Mum and Step-Dad of my friend Justin (who was in Napalm Death with me back in 1985/6)...I've never heard of The Hobbs single, so I'll be keeping an eye out for it...