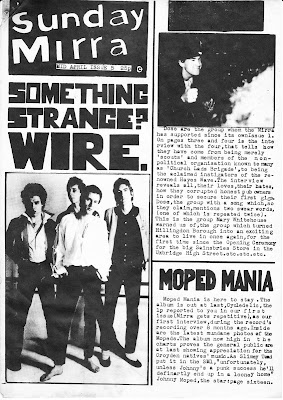 Sideburns Update
DaveO over at Music&Stuff has pulled off a blinder in tracking down a copy of Sideburns #1 Stateside - S#1 is of course the originator the legend, 'this is a chord, this is another, this is a third...now form a band' - thanks to the lad for sharing the article.
'
By way of a late ee first birthday celebration the next post will feature another fabulous fanzine giveaway competition - yippee!
Posted by Si at 10:56

Excellent stuff Si.....thought the reviewer of the Roxy LP was a bit harsh on the UK Subs ! Thanks for Grinding Halt as well.....another good un ! Thanks again ! Chris

Be sure to get in early doors for the next comp.