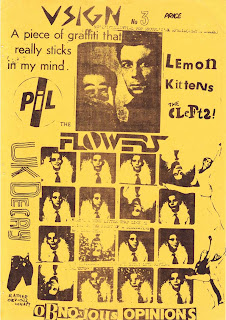 Creative graffitti, the voice of the secret public that those grey people in power would love to silence
﻿
There's a pointer back to the last post in this V Sign - editor Les comments on a particular short piece: ‘this bit hasn’t worked, KYPP#2 has some of my feelings put into words but I can’t do that very well – it all sounds too obvious’. Peer referencing was something of a theme and it's one of the charms of these fanzines; the dialogue among them - the encouragement and camaraderie, the barbs, feuds and spats. Les’ caveat aside, the bulk of V Sign #3 is smashing with some quality interviews and extended live reviews. Featuring: Clefts, The Flowers, UK Decay, Lemon Kittens, Martin Atkins (PIL); Live – Joy Division/Killing Joke/A Certain Ratio/Section 25, UK Decay/Pneumania, The Raincoats/Young Marble Giants, The Chords/Bees/Chron Gen; Local Scene Stevenage name-checking Actofed, Brutal Waste, Capital Punishment, Chron Gen, Clefts, Criminal Offender, The Daz, Deranged, Morbid Mindz, False Alarm, Optional Extras, Orange Disaster, Parasites, Rusty Planets, UAP (Unauthorised Personnel), and The Ultimate Universal Destruction [as noted, ‘some might not really exist’] + interesting graphics and ‘meaningless scrawl that doesn’t really communicate’. Ace!
A4 scanned at 600 dpi

Wonderful blog! I found it while searching on Yahoo News. Do you have any tips on how to get listed in Yahoo News? I’ve been trying for a while but I never seem to get there! Many thanks.sbobet

Cheers sbo - but apologies, I have no idea about yahoo news I'm afraid. Good luck with that.