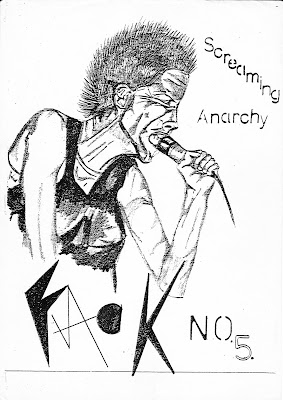 Freedom Anarchy Change oK: at least I think that's the origin of the title. At any rate, it's a great fanzine. FACK #5 was David and Juley's first foray into self publication, produced as it was on their recently acquired duplicator - a 'bit scrappy and badly organised' is how they describe their effort - presumably on account of it being a mix of single/double sided printing on a variety of papers. If only they'd known, such quirks add oodles of appeal: taking this fanzine apart and sifting through its pages of varying weights and finishes has been yet another opportunity to admire the determination and verve of the DIY wonderkids. Other titles baring the D&J imprint include Defiant Pose and Not So Brave & elsewhere, Mick Slaughter cites FACK as an inspiration for his Obituary. FACK #5 is charmingly packed with: features on Frenzy Battalion, The Puritans (Pre-War), The Mob, Nausea, Nihilist Corps, factional violence, protest as a positive force, anarchy; poetry from Annie Anxiety; live reviews of Erazerhead/Flux of Pink Indians/Rubella Ballet, Crass/Poison Girls/Annie Anxiety, FOPI/6 Minute War/Waxwork Dummies/Sinyx/The Diableptics, FOPI/Zoundz, UK Decay/Wasted Youth (kind of); record reviews of PGs, 6MW, Killing Joke, Discharge, Muddy Waters/Howlin' Wolf; more news on the above + the eratics, Rondos and The Subhumans.
'
A4 scanned at 400 dpi
FACK #5
Posted by Si at 19:55

Nice one Chris - I have another FACK to post - pleased to hear you're still enjoying them.

Brilliant Si: this was the first issue of Fack I bought...and I agree totally on the 'appeal' of the printing: this and Graham's New Crimes inspired us to borrow a duplicator to print zines with...

I haven't been looking for a while - there's a lot of downloading to do! ;)

Nice one Nic - thanks for dropping by. Was that Committed Suicide? Do you have any of those kicking about?? We could post 1 here...