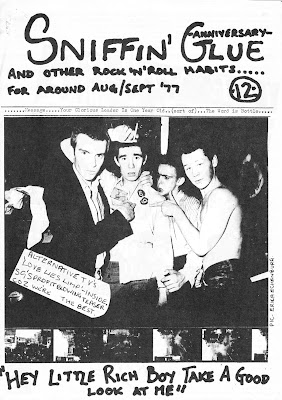 I put the magazine together with the same 'back to basics' approach as the music that I was to feature. The main text, if you could call it that, was typed out on an old children's typewriter that my parents had bought for me as a Christmas present when I was about ten. The titles and the limited 'graphics' I scrawled out with a black felt tipped pen. It was raw, to say the least, but it put across the punk message perfectly. It celebrated the DIY ethic but was also representative of the very best that I could do. Even in the first issue I was identifying punk as a scene separate from the rest of rock music, but because of my openness it could include reviews of my old favourites Blue Oyster Cult alongside obvious ravings about The Ramones.
Mark Perry, 2000
'
Correspondents here have noted how prolific some of the fanzine writers were - on the ball and what not - Sniffin' Glue is the classic example - spanning july '76-sept '77 (15 issues, 1-12 [see editorial in this issue for details of the peculiar numbering]) Sniffin' Glue was a monthly record of the emergent scene - Mark Perry & Co's view true, but undoubtedly astute. Issue #12 has: an appreciation of Chiswick Records with bits on The Count Bishops, Vince Taylor, The 101'ers, The Gorillas, Rocky Sharpe & The Razors, Little Bob Story, The Radio Stars, The Radiators From Space, Skrewdriver, The Rings, Motorhead; a great Jill Furmanovsky shot of Joe Strummer; articles on Generation X and Sham 69; Kris Needs' A Night at the Vortex; vinyl reviews of Motorhead, The Fantells, Ian Dury & the Blockheads, Roogaltor, Trinity, Dillinger, Prince Far I, John Cale, the Count Bishops, and lots of snazzy adverts. Marbled throughout with Danny Baker's witty prose.
'
I thoroughly recommend Sniffin' Glue: The Essential Punk Accessory - loads of background and reflection from Mark + a reprinted full run of the fanzine. Shop around and you should be able to score a copy for under £15 - well worth it.
'
Interesting iJamming! CHAT with MP
COMPETITION TIME
I've tampered with 2 of the pages in this pdf - to cop hold of the actual re stapled fanzine (sorry no flexi) all you need to do is spot either of the anachronisms. To me they're obvious - but then I know where to look - so apologies in advance if this proves a headfuck. To set a level playing field I'm gonna delay posting the link - it will appear at 7pm BST on friday 23 July. So all those wishing to have a crack get a fair chance of winning the fanzine. TIP: it's graphic not textual and to succeed with a hard copy you'll need to print A3ish. Good luck...

Andy T. wins the fanzine after correctly spotting The Only Ones' drummer Mike Kellie holding an iPod and the spitting punk in the New Wave compilation advert wearing a PIL badge. Well done to the lad.

As I said, this is a kind of punctuation mark - next up will be a mega posting centred on Bradford and West Yorkshire. I'm gonna post as much stuff as I can - so it'll not just be the fanzines, there'll also be a good few mp3s of featured bands - Violation, Friction Agitators, Chronic, Living Dead, Requiem, Monkey On A Rope, Dachau, Anti System, The Insane and more.
'
A4 scanned at 400 dpi
Sniffin' Glue #12
Posted by Si at 13:36

Good morning Si, I think I've figured out the answers?

The chap on the left in the Only Ones photo is holding a mobile phone or an iplod or some such modern invention?

The spitting punk on the 'New Wave' advert is wearing a PIL badge. PIL didn't exist when the album came out.

Congratulations Andy - well spotted - the fanzine is yours. So that's a clean sweep so far - folk'll start talking...

Anyway, I'll get that posted off to you.

Thanks for getting involved

Bit of a tough one that one Si ! Dont think i would ever of got that one....well done to Andy for getting them ! Another fantastic upload ! Look forward to the Bradford mega post....used to go to the 1 in 12 club quite a bit....a long time ago ! This looks quite interesting
http://www.amazon.co.uk/BRADFORDS-NOISE-VALLEYS-History-Bradford/dp/1904408540/ref=tag_dpp_lp_edpp_ttl_in
Hope to buy it one day ! Thanks again !

Nice one Chris - I may have to come up with something not so fiendish for tha Nicky& The Dots comp.

I can heartily recommend the Noises from the Valley (not just because my bands Anti System and Morbid Humour feature) - Gary and Matt are old friends of mine and I can vouch for the sweat and toil that went into producing the book. Are you aware that the book comes with 4 cds of Bradford bands? Be sure that you get those if you buy it - any probs just give me a shout. (Btw, I'm not on commission lol).

All the best
Cheers

Didnt realise you had been in Anti System....fantastic band ! Used to have the Defence EP back in the early 80s around 83/84...wish i still had it ! Still got the pax comps though ! Were you in any more bands after Anti System ? I'll have to dig out Ian Glaspers book again ! I'll probably get the noises from the valley book when we get back from Blackpool in a few weeks....

Hi Chris, yeah I mucked about in some other bands, Zed, Moota, Slack to name a few - but no great shakes really - though Zed was a lot of fun while it lasted - 3 times round Europe and shed loads of gigs in the UK - did some gigs with the Levellers and RDF. I should post the Zed 12" and demos here actually - I 'll have to conjure up an excuse.

To be honest Si....the names dont ring any bells,could have seen you in any of those though,went to a lot of gigs in the early 90s.....used to go watching the levellers & rdf a lot....was really into all that kind of stuff...as well as back to the planet aos3 the sea etc etc...would be great if you could post the zed stuff...would really like to hear that ! (really intrigued now !)

I should be able to dig an Zed anthology type cd out for you - Matt (Noises from the Valley) also specialises in digitising obscure Bradford music - I'l have a word - I have your address soI will get something in the post for you.

Thanks Si.....that would be fantastic !

Hi Nogsy... I am from Portland U.S.A and I am a big fan of Morbid humour/antisystem.. BIG fan. Aspiring recording engineer. Been trying to figure out a way to contact someone from M.H. to ask a question- How were the M.H. tracks for the split 7" (Oh my god 1 and 2) recorded? Was it at Southern studios? Or is it just a simple portable cassette studio recording? Any memories of whether all the sound of the band was picked up one room mic or if there were individually miced recordings. Love the quality of those recordings, some of the best out of the 80s, and easily one of the best tracks. Please let me know! I'd love to hear!
-Maus (Portland, Oregon, USA)

A pleasure Chris - I'll get that to you asap.

All the best to you

Hi there Maus - thanks for the props - I'll be in touch via email.

Hey! Thanks for all these great zines!
Do you know where did the Mark Perry quote used in the beginning of the post come from? I would love to read the complete interview.

Thanks Ugra - it's a pleasure.

The quote is taken from here:
http://www.amazon.co.uk/Sniffin-Glue-Essential-Punk-Accessory/dp/1860742750