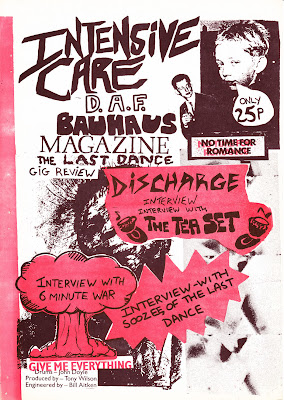 I Know it's untrendy to be a London based fanzine, but we don't give a fuck about what's trendy and what's not trendy. This is our second edition of a fanzine last time we were called Music Works but now we don't like that name and so we've changed it to Intensive Care as you will have noticed by looking at the front cover.

Kevin, 1980
'
So, Intensive Care is Kevin and Cram's second foray into fanzine production and a nice one it is too. Where the likes of R&T opted to cram every inch of page space with info/image, IC goes for the sparse look, and again I reckon it works well with some great use of graphics. Issue #1 includes the most extensive interview with 6 Minute War I've ever seen. Undoubtedly a fine band were 6MW - there's no denying their dedication to the DIY ethic. Yet, whilst reasonable in parts, overall their attacks on Crass were just tiresome - I don't think I've read an interview with 6MW in which they don't stick in the boot. At any rate, Kevin and Cram were careful enough to offer Crass the opportunity to respond to the criticism - which they do in IC#2 - so that'll be the next up. Issue #1 also has a piece on TV as brainwashing, IC charts + 7"s - Athletico Spizz 80, Delta 5, Freeze, Crass/Poison Girls.
'
A4 scanned at 400 dpi
Intensive Care #1
Posted by Si at 02:43

Thanks for this one Si. Top work again young man. And my postman actually did his job this morning as well so many thanks for that too :)

Thanks Longy - you're most welcome. Glad to hear your prize arrived safely - you earned it.

Nice one Si, haven't seen this zine before. Thanks!

Thanks for that DaveO - I'm just headed your way to grab that Jolt.

Nice one Chris - I'm hoping to have IC#2 uploaded today.